If you regularly follow my blog, and the weekly/video photo I would recommend skipping on to paragraph three, specific to this week’s video/photo.  I have decided to add a weekly video/photo section to my blog.  This blog will display a video or photo, usually highlighting an Adventure, while I might also sneak in some that are humorous, adorable, or just other fun dog moments.

So if you have followed my blog from the beginning you will know that I adopted Shadow as a puppy, and about a year later adopted Buster as a puppy.  We had many wonderful years together before experiencing the devastating loss of Buster at just seven.  It took a long time for our hearts to heal, but almost a year later we welcomed little Wilma into our world. 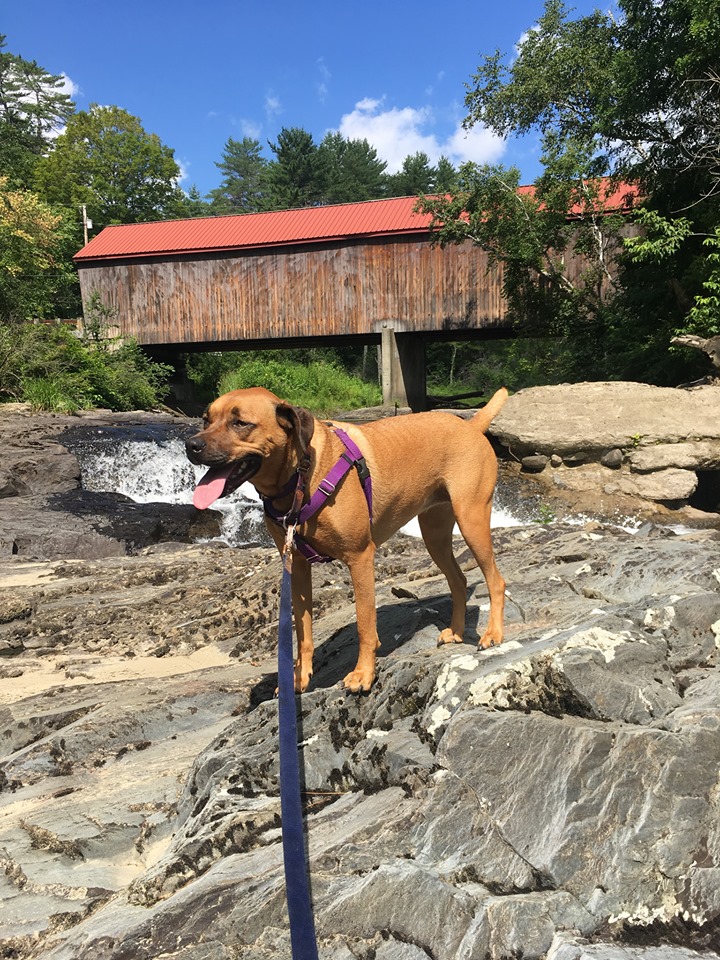 We had a picturesque Adventure to the Thetfield Center Covered Bridge.  The Bridge and Falls were the first stop on our day of Adventures in Vermont.  We parked along the bridge and hopped out to take some photographs.  It was challenging to get good views of the bridge , quite simple, and somewhat dull in appearance.  However we sauntered to the other side and back, attempting to peer down the River.  As we were finishing our visit, someone driving through told us about a side trail to enable water views of the bridge.  I was quite thrilled at this information.  We jumped in the car and drove enthusiastically past the River and down to the left where we found a parking area for a “trailhead” and located the path to the River.

The trail was short with some uneven spots.  We soon arrived at the rocks, and were pleasantly surprised at a completely different perspective.  The Thetfield Center Falls flowed below the Bridge into the Ompompanoosuc River.  It was a a lovely picture, rusty colored bridge, blue sky, and rushing water.  Shadow immediately located a pool of water for a dip, while I jumped around the rocks with Wilma, heading a bit closer for a close-up.  The rocks were quite slippery, but somehow I managed to catch myself before almost crashing on several occasions.  It was astonishing to see this location was actually the same bridge.  We spent time photographing, and appreciating the moments.  I think the Thetfield Center Bridge (side-view) was one of my favorite bridges.  So thankful for a kind stranger to give us this tip (Rating:  4.5). 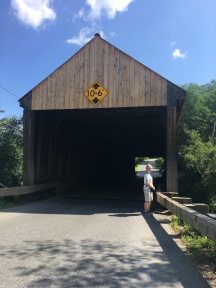 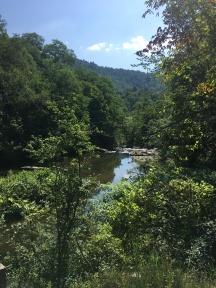 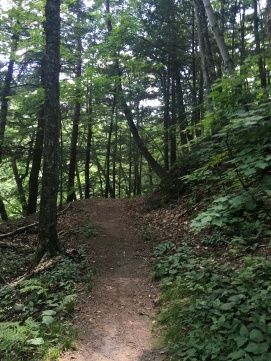 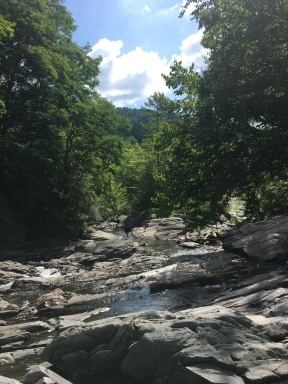