We had a unique Adventure to the Slater Mill Historic Site on an unusually warm September day.  I was eager to visit a Mill as Mills can be quite picturesque, and often include scenic water features.  We arrived to free parking, and an almost empty lot.  We began our journey walking past the entrance to the park on the opposite side of the Site.  I was surprised to find people sleeping, quite a bit of trash, and a popular location for what appeared to be the city’s homeless population.  However, I attempted to appear unphased and headed over to the beautiful brick path, paralleled along and above the Blackstone River.  The sun was shining bright,adding a glare in some photographs, however I attempted to capture the scene.  There was a bridge on one side of the River, and a dam on the other.  We did not spend much time in this open area, and soon wandered to the museum building.

We located some canal-like holes and found it quite odd to find them empty, leaving no possibility of fueling the waterwheel.  This discovery was a bit disappointing as I was hoping to see the waterwheel spinning in action.  However we re-focused our attention on the lovely mill buildings, and the House, beautifully contrasted in color, and gorgeous in style.  We sauntered back and forth ensuring not to miss a building, or landmark.  After viewing the buildings we ventured to the garden, somewhat out of season, but still spotted some brilliant colors along the way. There were several employees watering, and working hard to ensure the garden was in good care.  This area was small but a nice touch admidst the buildings.  Shadow and Wilma appeared to be quickly warm with the heat, but participated in their regular rolls, and sniffing.  Glad we could Adventure to the Slater Mill Historic Site today (This blog will not be rated as only the grounds were explored). 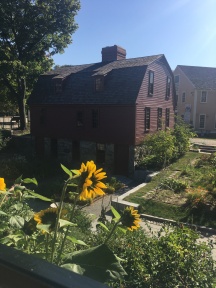 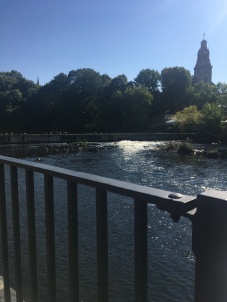 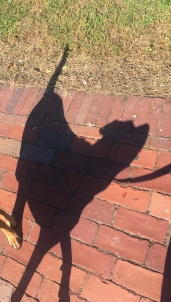 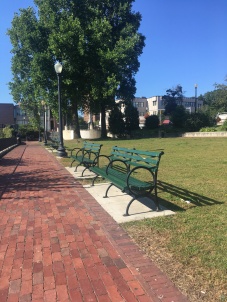 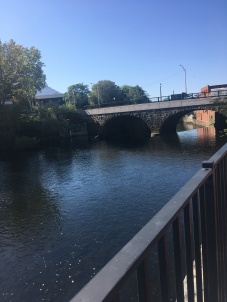