We had a gorgeous, sun-rising Adventure to the Ned’s Point Lighthouse.  I was unclear if dog’s were allowed at this spot due to my research, although finding some comments about dogs visiting.  I tried emailing the Lighthouse Keepers several months ago but never received a response.  I therefore decided to carry on with our Adventure.  Although I had planned to arrive just a bit earlier, I was pleased to make it with the sun still rising, sparkling atop the ocean.

Ned’s Lighthouse was simple, but quite picturesque, the ocean scene framing it as the sun shined to one side.  The Park was very quiet with one person sitting in their car, and several cars driving through.  We walked around for a bit posing for some photos, appreciating the heat of the sun, and peering out into the ocean.  I noted there was a sign on the beach stating no dogs so we avoided this area.  The tide appeared to be in as there was practically no beach area to explore.  An unembellished Lighthouse, but yet still the quintessential New England scene.  So glad we could visit Ned’s Point Lighthouse today (Rating:  4). 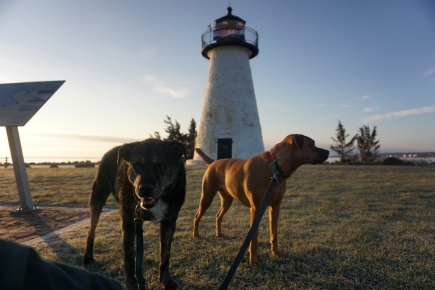 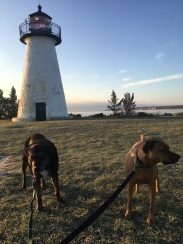