Today Shadow, Wilma, and I Adventured to Georgiana Falls in Lincoln, New Hampshire. Georgiana Falls consists of thirty feet of cascades. The Falls is sourced from the Harvard Brook.

We were excited to begin our Adventure to Georgiana Falls. The parking lot was at the end of Georgiana Falls Road. We began our hike to the Falls, locating a small sign confirming we were at the correct trailhead. The trail to the Falls ran under the highway on two separate occasions, creating a loud background sound of vehicles. The trail was quite uninviting, but improved when we arrived at the Brook, singing a musical song. We followed the Brook, and several times strolled over to the rocky, water’s edge. The Brook was boulder-filled, and shallow, allowing minimal opportunities for a swim. However, Shadow did make his way in on at least one occasion. Even when the footing is challenging,Shadow never misses a good opportunity for a summer cool-down.

We continued to follow the trail until we arrived at the suspected Georgiana Falls. We were disappointed to not even see any waterfall. It appears that Georgiana must be a Falls that is best seen in spring, as I am 99% sure we had arrived at the correct location. From there my plan was to hike to Harvard Falls, a bit farther, and steeper climb. I soon realized that the literal hopping from rock to rock was too much for Shadow, so we decided to head back to the trail. Shadow was energized by this decision, as he seemed quite uneasy with the numerous large boulders.

We then trotted back on the trail again taking several side trails to the Brook. I searched for color in the dull landscape, and found a couple bright yellow mushrooms and wildflowers along the path. Overall an unappealing hike, however the bland scenery never dampens our time on an Adventure (Rating: 2). 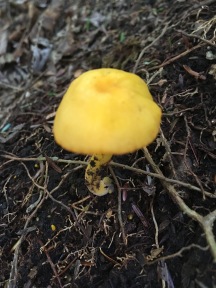 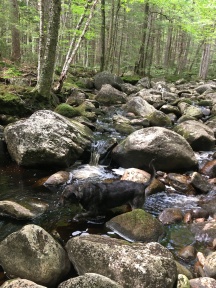 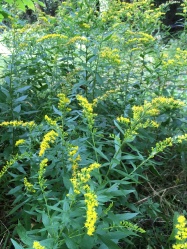 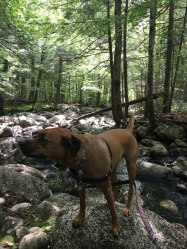