We had a lovely Adventure to the Comstock Covered Bridge. We were especially enthused as it was the first day that Wilma had Adventured to Connecticut! We found parking near the Bridge, and began exploring the area. The Comstock Covered Bridge is on the edge of the Salmon River State Park. (We only briefly explored the park, so I will not blog about the Park specifically.) Our journey began on and through the bridge as we walked back and forth, enjoying the views of the River and the Truss architecture of the Bridge. From there we headed down to the sandy shore to view the Bridge from the side. Shadow and Wilma posed as though they were in awe of the Bridge, and of course I attempted some family selfies.

We then followed the trail along the River for a bit, stopping for some Shadow swims. We quickly found a path down the River edge to hop along the rocks and to sit, relax, taking in the scenery. The area was overall quiet, with a few visitors here and there. We enjoyed our journey to the Comstock Covered Bridge, and may return in the future to thoroughly explore the Salmon River State Park (Rating: 3). 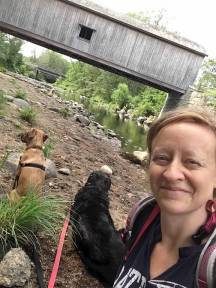 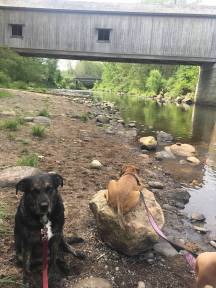