In October 2015 Buster, Shadow and I Adventured to the Samuel Champlain Memorial Lighthouse in Crown Point, New York. In July 1609 Samuel Champlain discovered the lake now known as Lake Champlain. An existing lighthouse was converted into a Memorial of the explorer in 1912, on the 300th anniversary of this discovery. The Monument is granite in material, and provides a staircase to climb for a spectacular view. The lighthouse was later deactivated as a bridge from New York and Vermont was constructed, and it was no longer needed. The Mounument is located on the grounds of the Crown Point Reservation.

Shadow, Buster, and I had a wonderful Adventure to the Samuel Champlain Memorial Lighthouse, three years ago. I absolutely love sharing my Throwback Blog, however my memory is not quite as detailed of these Adventures. However I still have fond memories of our visit to the Monument. The sun was out and it was a gorgeous fall day. After spotting the Monument from afar we parked and took a long stroll over to the Monument. The Monument was beautiful, and photographed well with the Fall scenery. We walked around the Monument, and then down to the dock checking out the view across Lake Champlain, the mountains framing a bright blue sea. We sauntered around for a bit attempting to not miss a detail. It is especially an exceptional Adventure when we find one without planning. We were lucky to spot the Samuel Champlain Memorial Lighthouse on our travels today (Rating: 5). 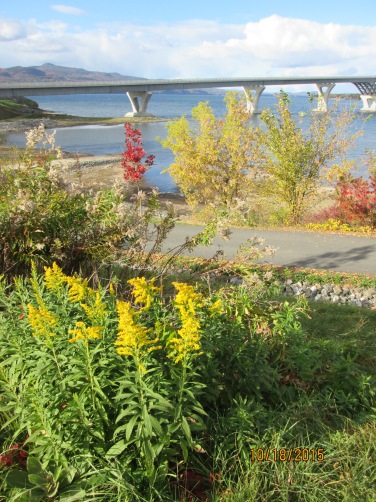