Today Shadow, Wilma, and I Adventured to Wadsworth State Park in the towns of Middlefield and Middletown, Connecticut. The park is a 285 acre park filed with trails, fishing, swimming, mountain biking, and two waterfalls. It is located on the Coginchaug River. Clarence Wadsworth, a well known Colonel, linguist, and scholar developed the land in order to preserve it for all citizens, therefore earning the name.

We had a delightful Fall Adventure to Wadsworth State Park. Although the day was dark from previous rain, and the temperature crisp, it was just perfect for a hike. We were excited to explore a Park in Connecticut, a place we have not frequented as much as the remaining New England states. Upon exiting the car we could immediately hear the roaring of the “Big” Falls. Although I had printed a map, we quickly found a large map which we viewed before heading straight to the “Big” Falls. The “Big” Falls was thunderous, and quite spectacular. It is hard to know what to expect when you plan a visit to a waterfall as sometimes they can be practically non-existent, especially in off season. The “Big” Falls, however did not disappoint, as it was heavy flowing, and music to our ears. The ground was covered with gorgeous Fall leaves adding the perfect touch to the lovely scene.

After viewing the “Big” Falls we searched for the trailhead. It took us awhile to finally find this location as we had to walk down the main street before eventually coming to the sign. A brief moment of frustration, but we soon were off on our way. We hiked all over this magnificent Park, the leaves yellow, red, and brightly patterned. There were numerous trails and turns, requiring constant peaks at the map. So lucky I had printed the map so we did not miss any highlights, and could not worry about getting lost. So with this map we headed to the “Little” Falls, which was less then a mile down the orange trail, and off onto the blue trail. Another marvelous waterfall this one had less flow, and more rocks, yet gorgeous in its own way. We spent a bit exploring the “Little” Falls, while the pups enjoyed some fresh flowing water.

From there we followed different colored trails attempting to find the various highlights on the map. There were shallow streams, a pond from afar, and even a “Giant Laurel” tree. I was humored by even locating a “Purple” trail, which might have been a first on our many Adventures. We spent about three hours hiking, seeing other friendly visitors here and there along the way. Definitely an enjoyable afternoon at the Wadsworth State Park (Rating: 4) 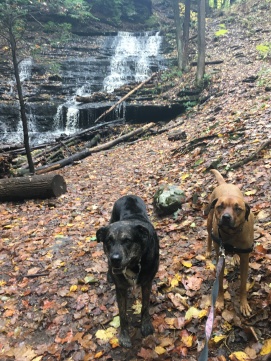 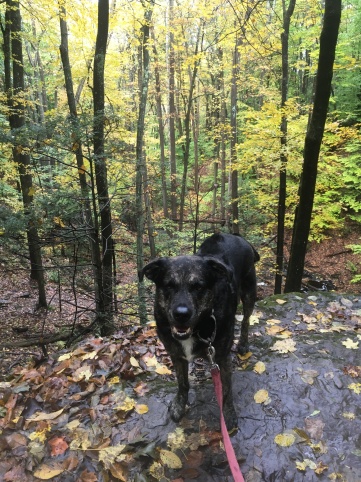