Today Shadow, Wilma, and I Adventured to the Babb’s Bridge which divides the towns of Gorham and Windham, Maine.  The Babb’s covered Bridge was originally built in 1840, making it the oldest covered bridge in Maine.  It later had to be rebuilt and also has undergone numerous repairs. The Babb’s Bridge traverses the Presumpscot River.

We had a brief visit to the Babb’s Bridge on a beautiful winter day.  Although on a public road we arrived to find numerous private property signs making it unclear as to where we could wander.  I decided to first drive through the bridge to take some photographs.  The far side, which I believe to be the Gorham side, provided no public River across.  Upon peering down the River I noted at least three rope swings, signs of a great summer day.  I debated walking through but the bridge was dark underneath and the traffic speedy so I chose to drive back across.

On what I suspect was the Windham side,  there was a beach-like area filled with a group of people fishing and enjoying the fresh air.  We tranced around a bit and snapped some quick photographs.  Fearing an accidental trespassing incident I decided to make it a short stop, although I guess often the case on a covered bridge Adventures.  So glad we could visit the Babb’s Bridge today (Rating:  3.5). 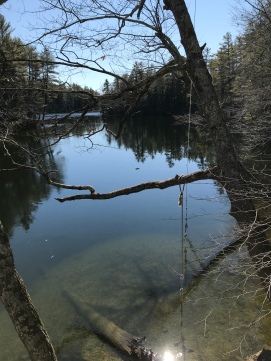 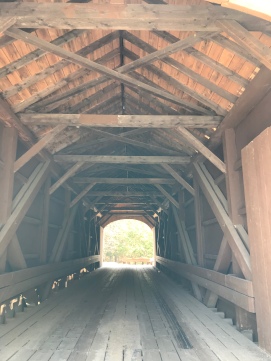